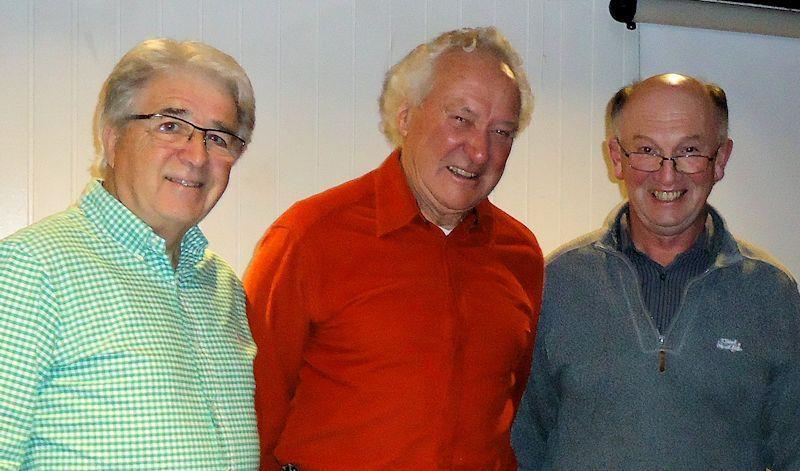 The 'Mid-week Sessions' were held on every Wednesday evening during November at the Larne Lough club. In due course over 100 members, as well as visitors from other Northern Ireland clubs, yachting and otherwise, made the journey - regardless of the foul weather at times - to enjoy EABC's innovative programme.

Robin Gray, the international race officer, got proceedings under way with his superb reveal on the happenings behind the scenes at the 2017/18 Volvo Ocean Race.

Next up, and in contrast, it was the performance story-teller and writer, Jane Talbot. With her tales of wild-hearted wonder, of faeries, selkies & headless horsemen: she had her audience in the palm of her hand.

On the 21st Nov, Dr David Hume MBE the eminent historian and broadcaster, took to the lectern to tell a packed clubhouse of the shipwrecks which litter the Antrim coast line.

A jubilant event organiser, the nautical novelist Tom Jobling said. "In many ways it was a risky project, but by bringing to our members, their guests and visiting non-members such a variety of speakers, we seem to have, as they say, 'squared the circle'. Robin Gray for example, really set the bar high with his illustrations and anecdotes, but Jane, cleared it! David's night caught us out - we ran out of chairs... As for Brian Black, well, we received a presentation of a standard expected of a professional broadcaster. It was, at times a 'nail-biter' while his slides touched the audience with the sheer beauty of the region. However, and as a climate campaigner and film maker he also showed us the ugly side - the pollution, and indeed the scary effects of changing climate... "

As something of a bonus, Brian had also waived his fee in favour of a collection towards a little known charity - www.sea-changers.org.uk - club commodore Steven Kirby announced later that the collection, which was topped off by EABC, raised £170.

The MID-WEEK SESSIONS return on 9th January 2019 with the maritime historian Guy Warner and his illustrated talk on the front-line role that Larne Harbour played in defeating the W.W.1 U-boat menace of the North Channel and Irish Sea.